Electronic Crossover Networks are used to improve the sound of a sound system by separating the high frequency sounds from the low frequency sounds and using a separate power amplifier and speaker for each. This is often called Bi-Amping. Typical crossover points range from about 500 to 3000 Hz. The Crossover Networks are also ideal for driving a Powered Subwoofer.  Typical crossover points  for subwoofers range from 40 to 150 Hz. For detailed information on how to use our electronic crossover networks download the users guide . Electronic crossovers are sometimes called active crossovers. Both refer to the same thing: line level crossovers that are used between preamp and power amp.
We also have passive line level crossovers; these also operate at low level (between preamp and power amp) but only use capacitors, resistors and inductors and have no power supply.
Finally we have the more traditional speaker level crossovers. 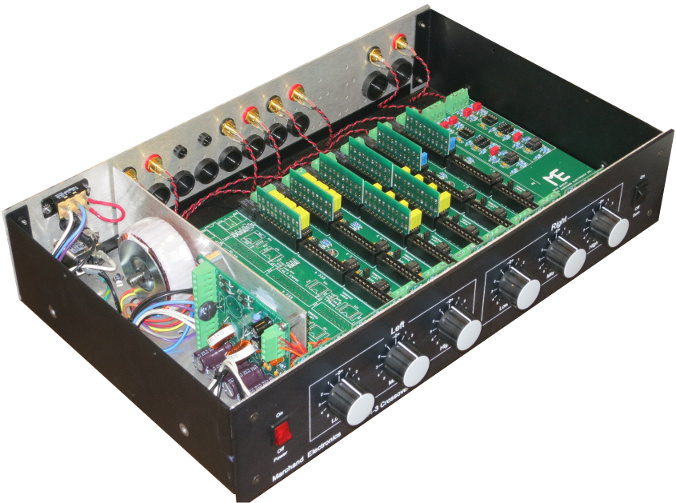 Note: The XM26, XM44, XM46, XM126 are all available with choice of slopes of 6,12,18 and/or 24 dB/oct. The XM44 has 48 dB/oct also available.
We use high quality parts only. Most resistors are 1% Metal Film, and the filters use Polypropylene capacitors. All connectors are gold plated. All crossovers have a standard 100/115/230VAC 50/60Hz power supply with detachable line cord (IEC connector).

All our products have a warranty of two years from the date of purchase. If they fail for any reason, just return the unit to us and we will fix it for free. We also have a customer satisfaction policy. If you are not happy with your purchase, just return it to us within 30 days of purchase, and we will send you a full refund. We accept Paypal, MasterCard, VISA, Discover, American Express and Checks. (how to order).


It is also possible to drive more than two speakers per channel. A three-way crossover would be used to drive a system with woofers, midranges and tweeters. 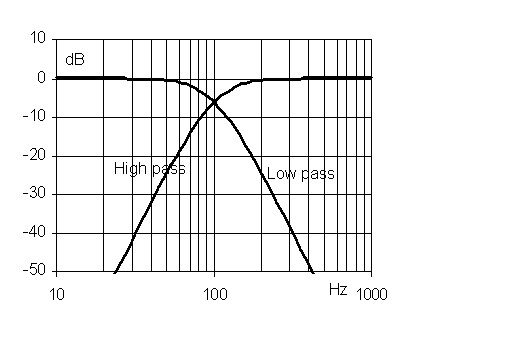 
The level controls on the front of the cabinet are used to set the volume of each loudspeaker for a proper match. There are several ways to adjust these controls. A good way to do this is to start out by setting all controls in the center (12 o’clock) position. Listen to some music and adjust the controls for proper volume from each speaker.
If a frequency generator is available, hook the generator up to the input of the crossover. Sweep the frequency from way below the crossover point to way above the crossover point. When the frequency crosses the crossover point the sound should shift from one speaker to the other, but the volume should remain the same.
A third way is to use a pink noise generator and a spectrum analyzer with a good microphone. Adjust the level controls for a flat response across the crossover point.
Sometimes the methods that use instruments result in settings that are not quite pleasing. If that is the case try to adjust the controls until the sound is best. After all, it is the final sound that is important. 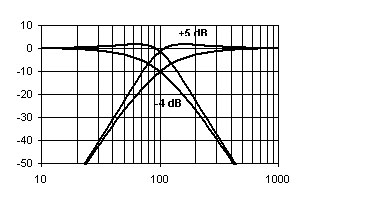